UPDATED THOUGHTS 10/11/15: I’ve grown to love the imbalance of Walker Assault. It’s almost like a multiplayer version of hard mode when you get to be the rebels, and that makes sense. In The Empire Strikes Back, the rebels were caught with their pants down against the full military might of the Empire and their scary-as-fuck robot camels. That’s how it should be. I like losing more as the rebels, simply because those rare occasions where we actually win are then made that much more satisfying. Unfortunately, but probably for the better, it will likely be patched to the point where the Empire will be the harder-working of the two sides. And that sucks, as currently in the beta people are finally figuring out how to use the game’s tools to win anyhow, balanced or not, as rebels.

Also, I finally got tons of playtime in with Vader and Luke. They’re both okay. Fun enough. But the one thing glaringly wrong with them is the lack of a time-extension feature for killing enemies. That was one of the best parts of SWBF2, the rush you got when you were in a nonstop kill-spree as a jedi or sith for an uninterrupted five minutes because for every enemy you killed you got an extra couple of seconds added to your timer. Here, it’s a matter of maximizing the allotted time given to you by not taking excessive damage. Eh. I understand they did it so hero power-ups wouldn’t become an instant win token for the few who would inevitably learn to break the jedi and sith, but still, I’d rather have it that way and have the tokens be a treat rather than just a mild variety card like they are now.

Original post: Lots of Battlefront posts, I know. But I’m doing it for two reasons: A.) Because I love this series and want to get every thought out there, and B.) If I compiled them all into one article it’d be a fifty page memo. 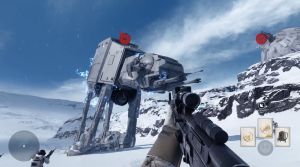 Here’s where we’re at: I’ve played an extensive chunk of the beta at this point, and I think there are some very simple remedies that would make Walker Assault much more fun and the game as a whole a lot better.

1.) Fix the spawns. Before anything else can be fixed, make it so that I don’t have to run two hundred yards to reach the satellite uplinks as either team.

2.) Make deactivating the uplinks take longer. This is the first way Walker Assault could become a more fundamentally balanced mode. If it takes longer for individual Empire players to deactivate rebel uplinks, that means it’s fair to assume less will be deactivated overall, giving the rebels far more shots at damaging the pair of AT-ATs.

3.) Let the X-Wings and A-Wings do chip damage. If you let their torpedoes and rockets do incremental damage to the AT-ATs (with their shields still active), it’ll add up over the course of the match and really give a sense of purpose to those who like to spend the entire time dogfighting instead of joining the fray on foot.

4.) Unrelated note: fix the vehicle token bug. Half the time when I use a vehicle token I go into the request animation but never actually get inside the vehicle itself, the game just shoving me back into first-person soldier mode as though nothing had happened.

Now, given these ideas for improvement, I’ve also refined my earlier thoughts regarding the beta. If there’s one thing I’ve learned to love about it, it’s the flight combat. Now that I’ve actually gotten a decent amount of time inside the TIE Fighters, X-Wings, A-Wings and Snowspeeders (still no TIE Bomber opportunity yet…), I can safely say they’re the best part of the game. The sound effects, the lasers, the air rippling off the side of the TIE fighter’s massive panels, all of it is MASTERFULLY done and feels super authentic. I actually felt giddy when I managed to do an aerial somersault that barely skimmed past an enemy X-Wing, the whole ordeal accompanied by the glorious screech of the near-death TIE Fighter I was piloting. Speaking of which, I am SUPER happy they brought back the automated vehicle maneuver feature from SWBF2 that lets you do bad-ass barrel rolls and flips with the touch of a button; really makes controlling flight an enjoyable experience.

Still not a single go-around with Luke or Vader, sadly. I really hate that it’s based on random luck of the draw. And really, that still sums up my feelings on the gameplay overall. It’s built for casual Star Wars fans who just want to play a game set in their favorite universe, not classic Battlefront fans who want a great game built-in as well. Too many things are left up to random tokens for it to be an exhilarating, competitive experience, unfortunately.